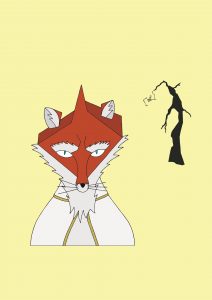 Saturday 9th June promises to be a fun and illuminating day in Stradbally, Co Laois.  It kicks off at 2pm in the Laois Arthouse with an exhibition entitled ‘Illustrating Joyce’s Finnegans Wake’, by Thomas Mc Nally.

Laois artist Thomas McNally has been working on interpreting Finnegans Wake for the last seven years and has published two books of his illustrations with The Lilliput Press (in 2014 and 2018). Both of these books are illustrated editions of the two fables that appear in Finnegans Wake. The first is The Ondt and the Gracehoper, Joyce’s re-telling of Aesop’s ‘The Ant and the Grasshopper’; and the second is The Mookse and the Gripes, Joyce’s version of Aesop’s ‘The Fox and the Grapes’.The exhibition at the Arthouse in Stradbally will consist of McNally’s illustrations of these fables. The drawings and paintings on display will offer visitors a unique perspective on the often bizarre – but always hilarious – world of Joyce’s later writing. McNally’s illustrations strive to capture the humour that is at the heart of Finnegans Wake, and his child-like and colourful illustrations make Joyce’s literary achievement accessible to a much wider audience.

Finnegans Wake is the final novel by James Joyce and is considered to be one of the greatest achievements by any writer in the twentieth century. But since its first publication in 1939, readers have been perplexed by Joyce’s strange and experimental use of language. While Joyce continues to be celebrated as Ireland’s most remarkable writer owing to the success of his other books such as Dubliners and Ulysses, his final novel remains a neglected and poorly-understood masterpiece.  The books and illustrations are for sale. The exhibition runs until the 29th June at the Laois Arthouse.

Thomas McNally is an artist and philosopher from Portlaoise. His philosophical publications include the book, Wittgenstein and the Philosophy of Language (Cambridge University Press, 2017). He has published two books of illustrations, both with the Lilliput Press: The Ondt and the Gracehoper (2014) and The Mookse and the Gripes (2018).

The opening will be performed by Emmet Byrne. Emmet is a proud Laois man from Ballyroan. He attended both the Ballyroan Boy’s National School and Heywood Community College. Emmet started acting at 21 in the Drama Society in NUI, Galway and completed a MA in Drama and Theatre in 2012. He moved to Dublin to pursue a career and since has acted on stages around Ireland including: The Lime Tree in Limerick, Town Hall Theatre in Galway, The Abbey, Bord Gáis Energy Theatre and The Gaiety in Dublin, and The Royal Opera House in Belfast. Most recently he starred as Sean Bourke in Cell Mates at The Hampstead Theatre, London. He also recently starred in RTÉ’s Striking Out as Ray Lamont.

At 4pm on Saturday 9th June, Invincible Spirit, by Simon Carman will be on view for the public to see in Mc Keon Stone, Stradbally, Co Laois before it is installed in the national Stud, Co Kildare. Simon made the work over the last number of months in Mc Keon Stone, whilst residing at the Laois Arthouse. The enormity of Simon’s project becomes clearer when we consider the medium in which he works and the methods he needs to employ. The stone he has been sculpting (taken from McKeon’s quarry in Kilkenny) was originally 32 tonnes and he says he has ‘trimmed it down to 19 tonnes in the quarry. On completion it will be approximately 16 tonnes. The sculpture will stand at 2m tall by 2.7m long and approximately 1.3m deep.’ He explains that he ‘generally carves with pneumatics (compressed air hammers) and a lot of the work is finished by hand, which is very time consuming. A lot of my recent work has been highly polished which means a lot of man-hours in hand-finishing. For commissioned work such as Invincible Spirit, I employ very traditional techniques of creating a perfectly to scale maquette from life and then scaling that up to the desired size.’ 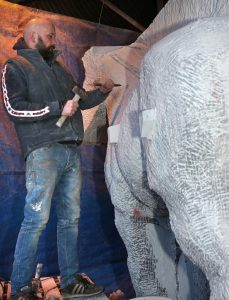 Simon Carman lives and works in County Fermanagh. As well as producing his own work, Carman is well recognised for his casting and carving skills and is often called upon to fabricate work for some of the country’s most recognised artists. Simon grew up in Dublin and has worked as an artist professionally all his life, following in the footsteps of his mother the recognised sculptor Cathy Carman, who hails from Co Laois. He attended Glasgow School of Art studying for a BA Hons in Sculpture following a foundation in Art at NCAD. He has worked in professional foundries such as Callow Bronze Foundry in County Mayo as well as setting up foundries and working for many years with the Leitrim Sculpture Centre.

Following the tour of Invincible Spirit, Simon will give a talk and slide presentation, at 5pm the Laois Arthouse. Refreshments will be served following the talk.

Saturday 10am-1pm (through the Library)

Wednesday and Friday 1pm-4pm (through the Laois Arthouse)