The artistic talents of the young people of Co. Laois, and the contribution they have made towards the success of the Texaco Children’s Art Competition, now in its 63rd year, were celebrated in a week-long art exhibition entitled ‘Time and Space’ – A Celebration of Texaco Children’s Art Success in Laois’ which opened at the Laois Arthouse Gallery, Stradbally on Thursday 21st September. 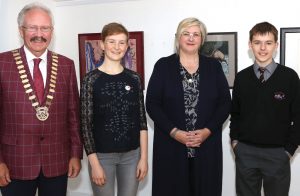 Also amongst the exhibits at Stradbally were works by three other Laois students all of whom featured highly in the competition this year. A  portrait study entitled ‘Weathered Wisdom’ by 13-years old Ciarán Leonard, a pupil at St. Mary’s CBS Portlaoise, which took second prize in the 12-13 years age category. Other young Laois winners whose winning works featured were sister and brother Asma Zulfiqas (age 14), from Scoil Chríost Rí, Portlaoise and Abdul Ahad Zulfiqar (age 6), from Holy Family Junior School, Portlaoise.

A pupil of Gaelcholáiste Cheatharlach in Carlow Town, Lucy Deegan is the daughter of well-known tourism industry figure, Jim Deegan – founder of the Railtours Ireland First Class organisation, and his wife Fionnuala – herself an accomplished animation artist whose work features in Hollywood blockbusters ‘An American Tail’ and ‘All Dogs Go To Heaven’.

No stranger to the Competition, Lucy has featured amongst the prizewinners on five occasions to date. Her three siblings, brother Tom and sisters Annie Rose and Juliet, have also won prizes in previous years.

As part of her prizewinning package, 17-years old Lucy from Luggacurran received a top prize of €1,500 plus an invitation to visit Tokyo awarded by the International Foundation for Arts and Culture where she was an honoured guest at a ceremony held in conjunction with the 18th International High School Arts Festival in which her winning artwork was exhibited.

Underlining the support that exists for the Texaco Children’s Art Competition is the fact that, over the past five years alone, some 2,799 entries were received from young Laois artists – a figure that confirms the view that the number of entries submitted by Laois students since the competition first began in 1955 amounts to some tens of thousands.

The exhibition was launched by Cathaoirleach of Laois County Council Padraig Fleming. Speaking about the exhibition Cathaoirleach Padraig Fleming said, ‘the level of young talent in our county is evident from the art works on display. The work is breathtaking. Choosing Lucy Deegan as Culture Night Ambassador is a very fitting honour. She is an inspiration to all art lovers, young and old in our county.’ 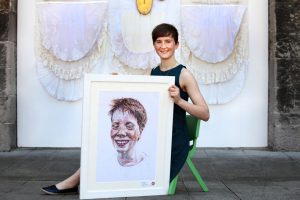