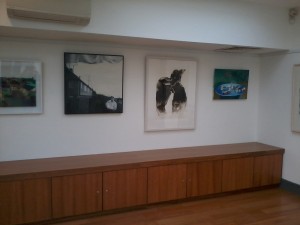 The exhibition includes paintings and sculpture by national and local artists. The artwork selected by the Arts Office, includes exhibits by well-known artists such as, John Keating, Bernadette Madden, Cathy Carman, Karen Hendy, Conor Brennan, Ray Murphy, Pat Byrne and Niall Fitzpatrick.  Normally sited in Áras an Chontae, the temporary exhibition will give the public the opportunity to see and appreciate the work by these very talented artists in the Gallery space at the Laois Arthouse.

Visitors can view this wonderful exhibition at the Laois Arthouse, Stradbally –  Monday to Friday – from 10.30am to 4pm or by appointment by contacting the Arts Office, Laois County Council 057 8664033.  (Closed for Christmas   19th Dec to 2nd Jan)

John Keating has exhibited nationally and internationally including exhibitions in the U.S.A., Italy, Spain, Greece, Monaco and China. His work is included in private and public collections in Ireland, the U.S.A., Australia, Italy, Greece and England. Keating has guest lectured and tutored on the drawing studies course at the National Gallery of Ireland, National College of Art and Design, Dublin Institute of Technology and at the University of Pittsburgh, U.S.A. Most recent international Exhibitions in 2012/13 include exhibitions in London, Beijing, Milan and Rome. Along with receiving 2 International Awards, John also received a Gold Medal of Honour at the OFA Olympic Fine Art 2012 at the Barbican Centre in London and a second edition Water Cube Cup Award in Beijing, China.

Bernadette Madden Dublin born Bernadette studied painting  in the National College of Art and Design. She works mainly through the medium of batik (wax resist on linen) and also makes screenprints on paper. Her work is in numerous public and private collections, including those of  the OPW, The Arts Council, AXA Insurance, The Ulster Museum and Trinity College. She has exhibited extensively in Ireland and abroad, including the USA, Germany , Norway and the UK.

Cathy Carman, graduate NCAD, widely acclaimed for her large figurative work in wood stone and bronze. Her expressionist style is also evident in the many public commissions she undertook in the 1990s, notably at the Blasket Island Heritage Centre near Dingle, Tuam Square, Sligo County Council Buildings and Summerhill in Dublin. She exhibits regularly, in group and solo shows both in Ireland and abroad.

Karen Hendy is one of the Professional Artists in Residence at The Arthouse Studios, Stradbally.  She is a graduate of NCAD and the Burren College of Art. Karen has exhibited at Ev+a International 2010, Eigse, The Royal Ulster Academy and the Royal Hibernian Academy. Karen’s is a Fellow of the Ballinglen Arts Foundation and her work is held both in Private and Public collections both home and abroad.

Conor Brennan is a Portlaoise born artist who has a Bachelor of Arts (Honours) Degree in Fine Art at Limerick School of Art and Design. Graduated from NCAD in 2012 with a Masters in Fine Art. Before attending Limerick, Conor spent a year in Abbeyleix FEC, studying art and design.  He currently lives and works in Portlaoise.

Ray Murphy from Cork City, now lives and works at Emo Court.  His work includes paintings and drawings inspired by the hidden architecture of Gandons’ masterpiece. Ray studied at N.C.A.D., and taught in Dublin before making Laois his home.  Ray continues to persue his artistic career in the beautiful surroundings of Emo Court.

Pat Byne  from County Laois, moved to Galway in 2006 to study at Galway – Mayo Institute of Technology. He received a Bachelor of Arts Degree in Art and Design in 2009 and in 2010 received a Bachelor of Arts Honours Degree in Fine Art.   In January 2011 Pat was awarded a residency from Laois County Council at the Mountrath Artist Studio and accommodation.  He held his first and second solo exhibitions, SHAPE at Leixlip Library Gallery in August 2011 and Corrosion at MadArt Gallery, Dublin in May 2012. Pat collaborated with the Arthouse Gallery and Studios 2011 artists that were resident in The Arthouse Gallery and Studios to build an installation for the Electric Picnic.

Niall Fitzpatrick is a Laois based artist. He graduated from Waterford RTC with a Diploma in Applied Art and works in archaeology, an occupation which provides him with subject matter for his historical illustrations.   Investigating the ancient past and studying the landscape has evoked in him a need to express his love of place through art.